Sludge in Koi Ponds, Biofilters do NOT Remove Solids which Cause Sludge in Ponds. We had a query the other day from the owner of a large pond in Cape Town. The volume was some 50,000 litres and he was sick and tired of the sludge at the bottom of the pond.

He wanted to know what type of filter he would need to remove the sludge and keep the bottom of the pond clean. Sadly we couldn’t help him because we were very honest in giving our advice.

This query once again reminded me that the vast majority of pond keepers see a pond filter as having the job of removing solids. It is not surprising since filtering of anything is normally associated with removing solids from a liquid.

When Sludge is present in your fish Pond you will need a sediment chamber, such as a Vortex filter, which pumps water from the pond into a sediment chamber and that way it wont get released back into the pond. The picture on the right is an example of a Vortex filter (Sediment Chamber), contact us for more info on Vortex Filters and we will be able to point you in the right direction!

A BIOFILTER IS NOT A TRADITIONAL FILTER

The words pond filter when used in discussing ponds leads to many confusions and has been the source of lots of complaints from people sold a pond filter by a retailer. The owner later discovers that the filter has no material impact upon the solids build up in the pond (sludge).

In a pond environment we should always therefore speak of a BIOFILTER and the most important job of a biofilter is NOT to remove solids but to purify the water in which the fish live.

In a pond where there is no biofilter many things can and do go wrong and the worst that can happen is that all the fish die from either poisoning or disease. The following is what’s important to understand…

A fish, through its normal metabolic processes, actually pollutes the water in which it swims. The pollutants are nitrogen based chemicals in either ammonia or nitrite forms. The biofilter converts the ammonia and nitrites to nitrates which is relatively harmless to fish although nitrates are responsible for murky water and blanketweed…

A biofilter is used as a place to hold large colonies of bacteria which cling to surfaces inside the biofilter such as plastic tubes or balls, foam or other media such as Alfagrog . These bacteria remove the pollutants from the water as it is pumped through the filter. Now of course the filter will actually remove some solids but it will be a small percentage of the solids that find their way into a pond and it will only be a portion of those solids actually suspended in the water.

Solids in a pond come from wind borne debris, excess fish food, rain run-off and fish faeces. These solids normally settle quite quickly and are not picked up by the pump. As a result and over time a sediment consisting of organic and inorganic debris builds up on the bottom of the pond and after years this can become sludge.

Viresco and other sludge digesters will to some extent control the organic debris but such additives will have no impact upon the inorganic (soil, sand etc) debris which will continue to build up.

For people with small ponds it is not too big of a job to empty the pond every year or so but if the pond is large then emptying the pond is no small job and not recommended. 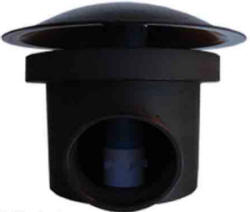 Bottom Drains Work! Every large pond should be built to include a bottom drain… such a system allows water to accumulate at the drain point where it is continuously removed with the recirculating water that is sucked from the bottom drain. Solids are then removed in a settling chamber of some description (a vortex unit is the most efficient).

Of course if your pond is already built and does not have a bottom drain this advice doesn’t help. This only leaves one option other than emptying the pond and that is to use a specially designed and safe-to-use pond vacuum.